Can I move my exhibits to the main navigation dropdown, so visitors don’t have to hit open sesame (“Exhibits”) before seeing the treasure? I don’t see the utility of having them nested under Exhibits if they’re the centerpiece of the site. Thanks!

In the site’s Navigation settings, you could turn off the default Exhibits entry and then add manual entries for each exhibit you want to appear there.

Right, I’d tried that to no avail. When I added a new entry, named it Maps, and gave it the URL “/cwfronts/maps,” Maps appears on the Navigation list with an X next to the > arrow. When I go to the Maps page I see 404.
I’ve missed a step somewhere between cancelling Exhibits and making manual entries to replace it.

I’ve tried this, too. I create the path just as you said, /cwfronts/exhibits/show/maps, and it shows up on the Navigation list with an X before the >. I go to said page and get 404.

What triggers the X?

Can you show us a screenshot? Or even better, give a link to the site?

I’m not totally sure what’s going on with the “X” you’re describing. 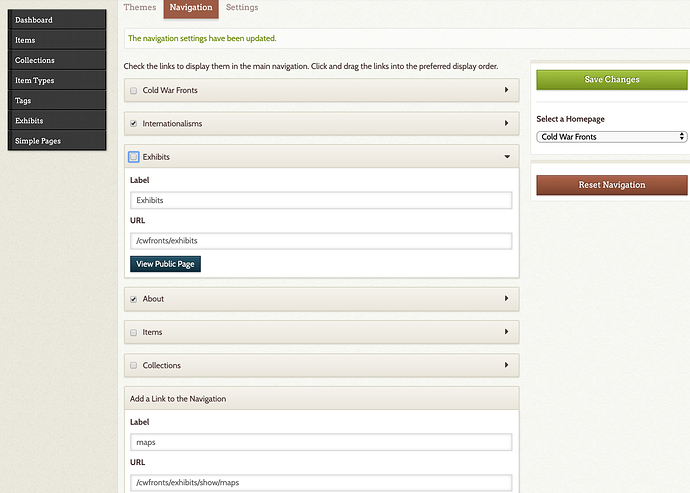 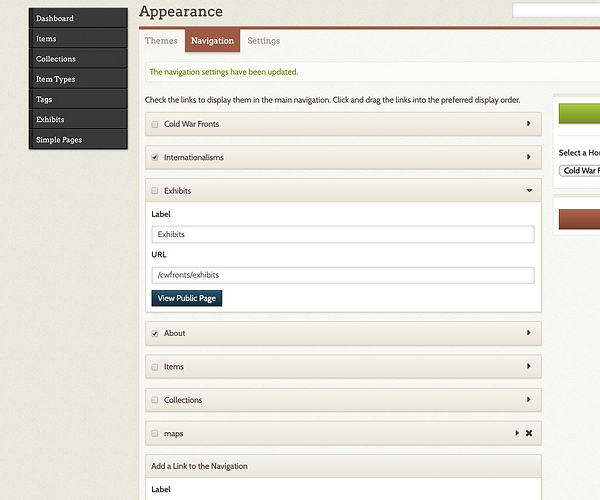 The X allows you to remove the custom URL.

In order to include the custom URL nav item, you need to check the box for nav block (the one to the left of the word maps

Yes, I’d checked the box for nav block.
But your tip on including the whole URL worked! This is strange, seeing as the simple pages worked without “nkrutter//:” (e.g. “/cwfronts/about”).
Many thanks!