After years of dabbling, I’m still very naïve about LOD. Which means that this is a difficult question for me to phrase.

How do I import (some of) RVM FAST’s authority records?

What I’m Trying to Do

In the end, what I’m expecting is an easy way to consistently assign subject headings to learning resources (and these SHs would come from those vocs). As far as I can tell, this is something which makes Omeka S shine. If that part of the proof of concept, it could put Omeka S ahead of other solutions.

RVM («Répertoire de vedettes-matière» aka “Repertory for Subject Headings”) produces a set of thesauri which are widely used in Quebec. It’s a bit like LCSH for Quebec. Though these thesauri are closed (and typically distributed as MARC), the team has been working on LOD versions in open access.

There’s already a beta of an open access version based on OCLC’s FAST (Faceted Application of Subject Terminology). That’s the aforelinked RVM FAST. It uses the same core LOV as the closed RVM does. Compared to RVM, RVM FAST is meant to become simpler to use for non-librarians (myself included).

After some interactions with the RVM team, and collaborating with them on solving a bug, I’ve successfully imported RVM’s core vocabulary (currently in beta).

I can find and download Linked Data files for specific records in RVM FAST. 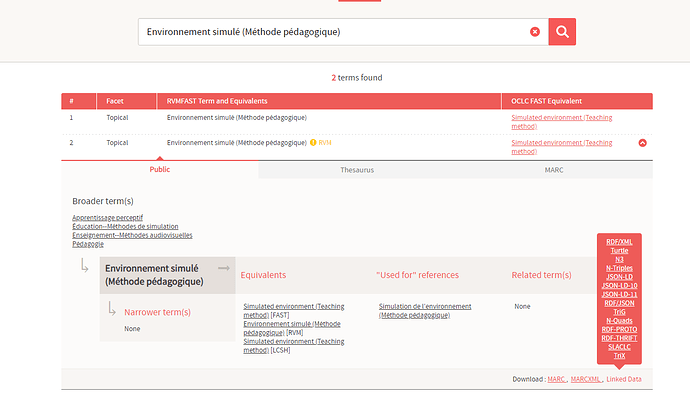 The next step would be to import records using that core voc I’ve imported.

What do I do with that .ttl (or .nt, .trix…) file? Where do I put it so that it’s available in a resource template for new items?

As you probably understand, I realize that I might be off at a fundamental level. At the same time, it feels like we’re close to that (intermediate) goal.

Any help would be deeply appreciated.

I’m pretty sure the Value Suggest module is what you’re looking for. It already includes OCLC FAST but not RVM FAST. Do you know if RVM has an API endpoint that returns query results that are machine-readable? The module cannot function without such a service.

Thanks for this!
It does sound like the VS module holds a key to the right path. Some of the vocabs included could probably work for the proof-of-concept. I notice that some of these are too slow for the autocomplete to work properly in such a situation. I’ll choose a more efficient one.
I’ll also have to make sure things are set properly in terms of language. Most of our resources are in French.

Maybe I could use the VSA module @Daniel_KM to query ULaval’s Répertoire des vedettes-matière… once they launch their API endpoint.

So, thanks again! Now, to investigate and test…