Item elements on one line

In my project most of the contents inserted in the database are quite short. As a result page becomes quite long and right side is white and empty. In other words - not so nice look. 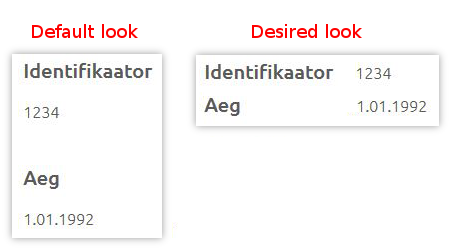 Question: Is it possible to show element name and it’s content in one line?

Seems like thing that would be solvable by editing the theme, but I haven’t been able to locate the place where to do that. I’m currently using theme seasons. I also haven’t found any templates, that does that, to view for some examples.

Thank you very much for your help!

The trick with Omeka themes is that even though they’re quite small, there are actually many more “theme” files being used. It’s just that any time a theme doesn’t include some particular file, Omeka automatically falls back to a default version.

One of those files that most themes just use the default for is common/record-metadata.php. That’s the file that controls the output from all_element_texts(), the function that’s usually used to print out the metadata for a record.

You also have another option that doesn’t involve editing the markup: just modifying the CSS to display the metadata side by side.