I’m a pretty novice user here, just starting last night. That said it seems the software is pretty intuitive and so I’ve done a considerable amount of migration from our offline-database onto the new Omeka powered domain. (Buildingartscenterarchive.org). That said there’s a bug which is driving me crazy, and it appears 30-40% of the time after I upload an image file…

That image will upload but rotate itself 90 degrees. This looks terrible, and I’ve thought about writing in disclaimers for users that to view the image right side up, they just have to click on the thumbnail–but that’s kind of not acceptable. Worse, 10-15% of the time no image thumbnail will load at all, yes the image will be there, but then I absolutely need to provide a disclaimer–that in fact there is an image, even if there isn’t a thumbnail.

Is this something I’m doing wrong? We really don’t have the time or skills to create our own theme, which we absolutely need to do in the future, is this theme related?

Any help would be much appreciated. Thanks.

Since you’re migrating what seems like a large number of images, are you using the Dropbox plugin? If not, you might try that and see if that makes a difference. Nice pictures - hope you can figure it out.

Thanks. I haven’t tried that yet, I’m just going straight from a networked HDD. We’ve got thousands more to upload.

I’ll get right on this, thanks again.

Guess I’m stuck in a rut again, while trying to install and enable the plugin, and following the instructions, my FTP client won’t let me enter the command (chmod -r 775 files). It keeps saying that’s incorrect.

And again, let me stress my tech-less skills. I manage wordpress quite well and fine, but this, this is tricky. Here is where I’m trying to enter the command in the ‘files’ folder: 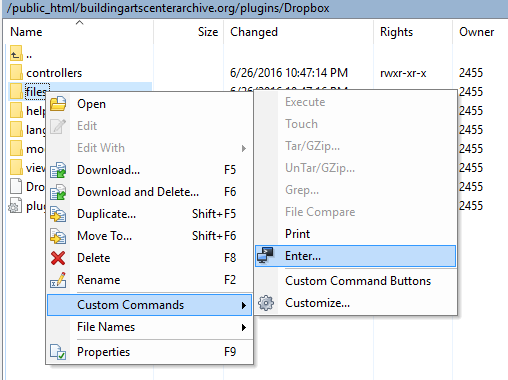 Not sure I can help with this question, but I use FileZilla to transfer my files directly into the ‘files’ folder in the Dropbox plugin. Once you upload the Dropbox folder into your Plugin folder, you can activate it from your admin panel on the backend of your Omeka site.

There’s usually some kind of admin tool, like CPanel, that will let you change the permissions directly.

Regarding the rotated images, this often happens because lots of image viewing software has a rotate image feature, but it doesn’t actually save the rotation onto the image itself. An image editor (as opposed to viewer) should let you save the rotation so it ‘sticks’ before you upload the files to Omeka.

Thanks, that is exactly what I was doing. This is sort of a mock-up for demonstration purposes, and I used the viewer to simply save time. I’ll try that fix.

It’s also possible to configure Omeka to respect those “soft” rotations on images when it makes its thumbnails.

in application/config/config.ini The documentation mentions this among the options you can set for thumbnail generation.

What about in instances where no thumbnail appears at all? This happens 10-15% of the time, in those instances 60% of the time, I can delete and re-upload–and the thumbnail will appear. But lately I’ve noticed with growing frustration these thumbnails never load. Is this something to do with the image file itself?

For the ones not appearing, try activating error logging. Whenever we’re unable to make a thumbnail for an uploaded image, it should be logged. After having an image upload with no thumbnail, you should be able to check the log (or post it here) and get some idea of what’s going on.

I captured a live one:

Are you on shared hosting? I’d check with them… they might have an idea of what’s happening or a solution.

It’s somewhat likely that you’re hitting a quota or limit on memory usage or something similar, and you’d have to talk to your host about that.

it’s weird though, because it only happens 10% of the time. After that one didn’t load, I went ahead and uploaded 30 more images. Yes, shared hosting, but it’s unlimited data, I’ll call Inmotion though.

I called my host this morning, there’s no data or memory cap on my plan. However they said that ImageMagick was not built for shared servers, so that’s why that error pops up. I still don’t understand why it only happens 3-5% of the time.