I want to make markers for items based on the longitude and latitude properties within these items.
I think “Batch edit items” is meant for this, but I can’t find an documentation how to use this feature. I thought choosing “Copy coordinates to mapping markers” and specifing the 2 source properties would be enough. But although the message “Edit succesfull” is shown (and no errors in the log), the marker wasn’t created. What am I missing? 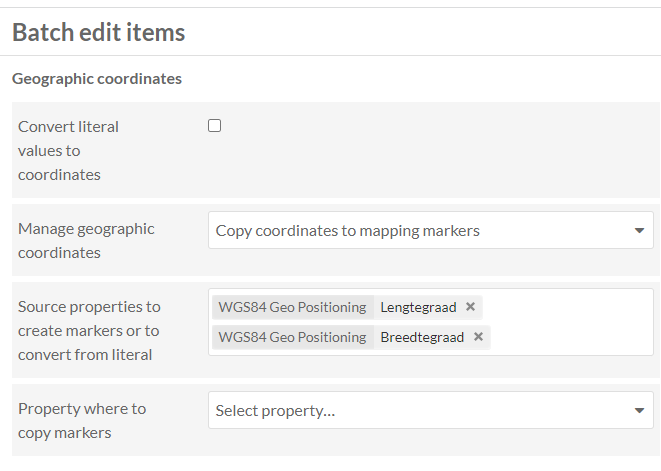 These entries look like they come from the “Data Type Geometry” module. Is that what you’re trying to use? Or are you trying to use the “Mapping” module?

In this case I think it’s purely related to the Mapping module, the coordinates are just literals. (I do have the Datatype Geometry installed too, but not using it in these specific items, more for lines and areas)

But actually, I don’t know which module services this bulk edit?

That’s what I was trying to say: I’m pretty sure those bulk edit form entries you screenshotted come from that other module (one I’m not familiar with), not Mapping.

Though it seems likely that other module does handle creating Mapping markers like you want. From what you’ve shown, it sounds like you would want to “convert literal values to coordinates”… though that might result in the values being turned into the “coordinate” data type that module provides. Again, I’m not really familiar with that module so this is just from a cursory look.

Mapping itself doesn’t have a feature for converting from existing metadata values, I don’t think. It can work with coordinates in a CSV Import and import them as mapping markers, but I’m not aware of it having a similar feature for working with values.

For now, I opted for some database queries to get this task done.