On our Omeka installation I’ve managed to get the thumbnail generation working when uploading .mp4-video files through the file tab in objects (by installing ffmpeg along with ImageMagick).

We also have some already present video files that I tried to re-create the derivatives for using the Derivative Images plugin. However, no derivates are created when I run the plugin. Everything seems to work well. I can select “video/mp4” from the MIME-type list and Omeka tells me the process is running in the background and may take a while to finish.

Do those same videos work if you upload them “fresh”?

The Derivative Images plugin should work the same as uploading directly. If there’s some difference between the two it might point to some kind of problem with the plugin.

Yes, it works as expected when uploading through the normal file upload as well as through the Dropbox plugin for larger files. We’re using Omeka 2.4.

Have you checked the files/show pages for these unaffected files to make sure that Omeka thinks they have the MIME type “video/mp4”? Obviously you have some number of video/mp4 files since it appeared in the list to choose from in the plugin, but maybe the files you’re seeing not change actually have some different MIME type that Omeka detected. This can happen due to small differences in the files; the detection process isn’t 100% accurate.

That MIME type information is shown on the right sidebar of the file’s show page.

It seems to be in order. I’ve attached a screenshot of the metadata for one of the mp4-videos. It’s in swedish 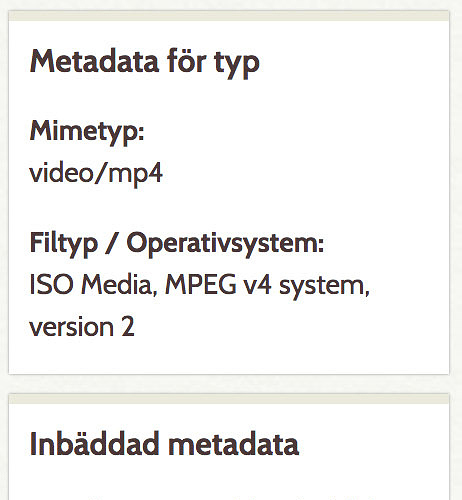