Has anyone else run into issues with Neatline leaving “|||osm” in the Coverage field (see screenshot 1)? I can’t figure out what’s going on. If I deactivate everything, it’s still there. I uninstalled Neatline Features (which was causing an issue with Tiny MCE). We aren’t really using Neatline for anything publicly at the moment, but I don’t want to uninstall it because there’s still some things in there people were working on. Whether or not I activate it, however, I can’t get rid of that osm in the Coverage field. Not sure what’s the best way to handle this at this point considering we have 3,400+ records all with this field and that garbage in it.

And here’s the current plug-in setup: 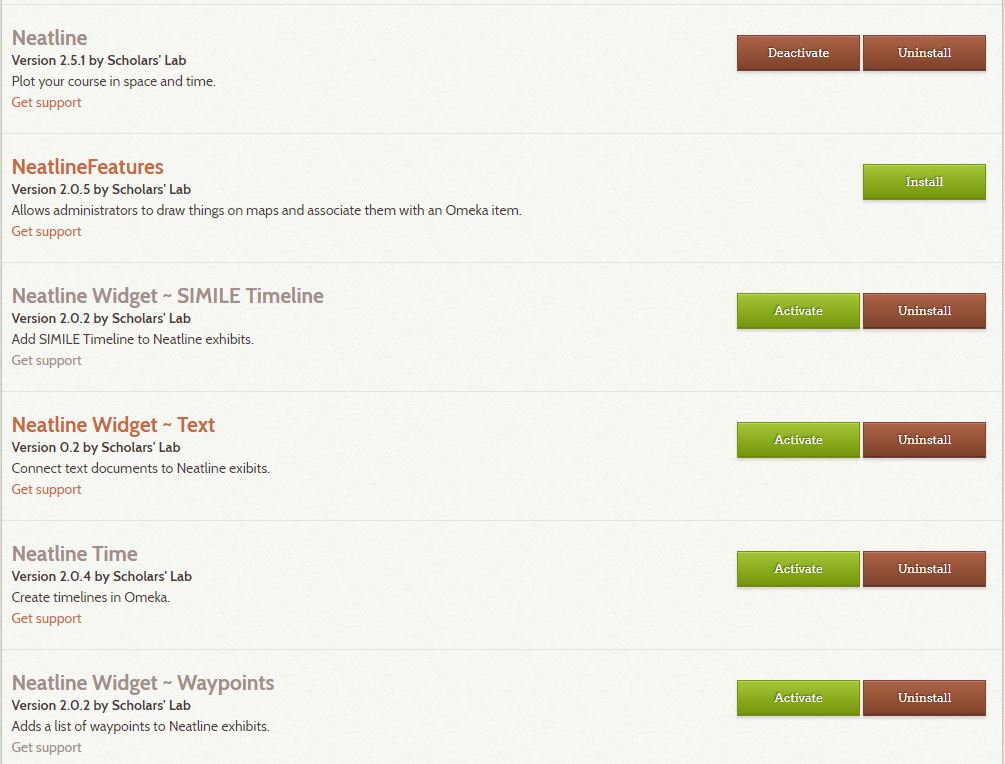 Thanks for the report. I haven’t seen this before, so I’m doing some checking now.

Which version of Omeka are you using with Neatline 2.5.1? Was there data in the Coverage field before the item included in a Neatline exhibit? What other plugins are installed on this instance of Omeka.

Thank you for any further information!
Ronda

This is the latest version, Omeka 2.6.1, although I noticed some issues with it in the previous version (2.5.1) - usually only when I had it deactivated though. Even when deactivated now I am still seeing this issue. In our case, there is always data in the item prior to Neatline because we enter that info when the item is first added.

Other plug-ins: well, we have a lot of plug-ins installed. Here’s the list!

As the other screenshot shows, however, I deactivated almost all the Neatline plug-ins for now. I’m wondering if I need to try uninstalling them all.

Thank you for the clarification that something is corrupting data that’s in the Coverage field. That was the piece I was most unsure of. I’m going to try to replicate this now without any other plugins installed, and I’ll talk to our R&D guys to get instructions on how to look behind the scenes for interactions between plugins that may be contributing.

One more clarification, so I can look for things in the right order/location: did you install all these plugins at the same time as you installed Neatline, and you’ve been using them without data corruption issues until you tried out Neatline? Thanks!

I’ll get back to you as soon as I can.
Ronda

The plugins were installed at various times, I can’t really say which were installed exactly when and in what order. I did upgrade Omeka to 2.6.1 last week, but this was an issue before as well. However, if I left Neatline and N Features activated, it usually got rid of the osm in Coverage. We can’t keep Neatline Features activated anymore because it now messes up the Tiny MCE feature (which was upgraded in Omeka 2.6.1), as noted above. We also aren’t using Features anymore, so I thought I’d just uninstall it. That worked fine to clear up the Tiny MCE issue, but now the osm is left in the Coverage field.

This still hasn’t been resolved, so I think I’m going to try completely uninstalling everything related to Neatline. If that doesn’t work, I guess I will have to run scripts by hand on the back-end to get rid of this extraneous info in that field. I don’t see a better solution.

Apologies for the delay in responding. We haven’t been able to replicate this issue at all.

Jeremy has suggested that you could try installing the Bulk Metadata Editor plugin to see if it will let you clean up those fields.

If you could please send me the spreadsheet that resulted in the import errors, we’d like to keep trying to replicate this. It just seems to random to not nail down exactly how this error happened to you. My email is rag9b (at) virginia.edu.

This data was not imported; it’s been added over the last two years or so, as individual records.

Just an update. I deactivated and uninstalled Neatline, but the issue is still there for older items. I have no idea what happened or why, but I guess at this point my only option is to run scripts. My guess is that at some point there was a weird conflict between multiple mapping plugins all installed at the same time, but unfortunately I think it’s too difficult to trace the issue at this point.