I’ve noticed an issue when I updated an Omeka S website to version 3.1.1. When regular users submit items, they are not assigned to any website even though there’s one configured to accept new items through the “auto-assign new items” settings. However, if a logged-in user submits an item, it’s assigned correctly to the website configured to accept the new items. It worked with v3.0 previously after an update but doesn’t work with 3.1.1.
Could this be a problem with v3.1.1?

By regular users vs. logged-in users, do you mean you’re using the Collecting module and that’s where the problem lies, with items added from Collecting?

Collecting 1.6.1 added a feature where items are automatically assigned to the site where the collecting form is. Does that sound like what’s happening?

Yes, the site is using Collecting 1.7 (which I think should be the latest), and items added by regular users are added to the correct Item Set and not assigned to the website itself - that’s where the issue seems to be.

What I mean to ask is: what those newer versions of Collecting do is, they assign a single site automatically, so I’d expect these collected items to be assigned to that one site, not none at all.

Yes, the new items appear in no sites except for a logged in user who submits an item.

Can you share a screenshot of the Sites tab of the edit page for one of these problematic items, assuming you have ones that have not been “fixed” already?

I have a good idea of what we’d need to do to fix this, but if they’re appearing in no sites at all, I’m less certain of what the problem you’re experiencing is.

Sure.
The first screenshot is an item submitted when not signed in (regular user and to the right, it appears only under an item set and no website associated with it) and the second screenshot is the message you get when you try to edit it. 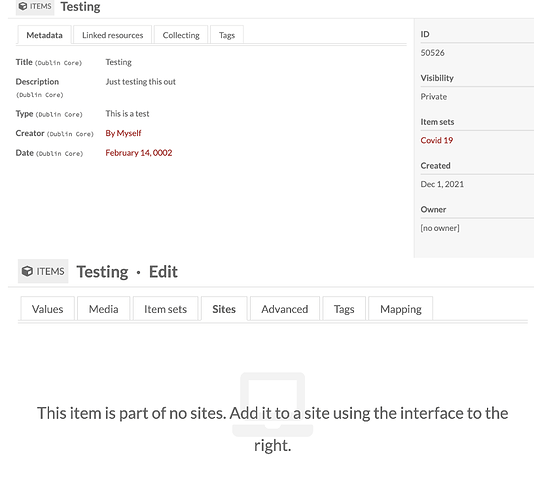 Thanks for bringing this to our attention. We just released a new version of Collecting that should fix the problem. Upgrade to the new version, edit your form, and check the new “Use default site assignments” option.

Thanks, Jim for working on this so quickly. The new version resolved the issue.
Thank you!